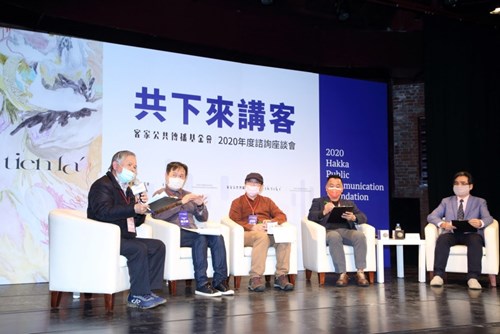 Professor Ho offered his suggestion on how to make the ethnic culture and language enter people’s daily lives for the Foundation to continue promoting Hakka heritage.

IPCF President Maraos pointed out HPCF is the organization that has the closest relationship with IPCF, and both foundations endeavor to promote ethnic harmony between the indigenous and Hakka communities in Taiwan’s multicultural society. He hopes that the bilateral collaboration will contribute to diversified outburst of creativity in broadcast production.

As a Hakka artist who employed virtual and augmented reality technology to lead his viewers to the world of painter Kuo Hsueh-hu's (郭雪湖) artworks, Professor Huang said that new media can help young generations to rediscover Hakka culture, enabling people who barely understand the Hakka language to get close to the Hakka community. He added that the modern theatre is also a good medium in mass communication.

Director Yao noted that, through theatrical performances integrated with the Hakka language and culture, the audience can become more familiar with the ethnic group.

According to HPCF, it will bring together views and opinions of the participants from various fields in the March 4 meeting, integrating constructive feedback into the Foundation’s policy of operating Hakka mass media in hope to help build a diverse society that embraces all ethnicities.